Shujakku was taught to Meibukai members initially in 1990. It's embusen (kata line) is very similar to that of Seiryu and Byako. Again this is also a mirror kata to be paired with Genbu. The majority of techniques in Shujakku are open handed (i.e.. nukite, press blocks etc.). There is a suri ashi block-strike technique practiced here similar to moves done in Seipai. Shujakku represents the Ah Kata. To have proficiency in this Kata, one must have the fluidity of a Sparrow in flight!

Created in 1988, Byakko teaches evasion techniques (Tai Sabaki) used against techniques from the Seiryu kata. Like Seiryu, emphasis is placed on correct stance transitions. Byakko was also developed to be paired with Seiryu as mirror kata. Byako represents the Um Kata. Soto  uke is first introduced in Byakko.

Genbu is the newest of the Meibuken kata. It was introduced in late 1990. It works on attacks and blocks at close range. Its techniques correspond to those of the Shujakku kata. Techniques emphasized in this kata are the koken uke, double punch and double front kick. It also works on the arm break technique from Kaishu kata Shisoshin. Genbu represents the Um Kata.

These katas are the more complexed parts of our Goju-ryu syllabus. In 1997, Dai Sensei explained many insights into these kata names, meanings, etc. He made it very clear that to understand these katas you must already have a strong base in the performance of the Kaishu Kata. Please click here to see  Hanshi Ken Tallack performing Genbu  Kata:

Bushido Studios was founded in Fredericton, N.B. in 1984 by Sensei Sam Rideout (then Sandan) and stayed in operation until 1987. Sensei Rideout had been a student of Sensei Jim Burton since 1972.

Sensei Burton was a student of Uehara Ko sensei, among others, during stays in Okinawa as a member of the U.S. Armed Forces.

In 1987 Rob McFee began training at the Bushido Studios under two of Sensei Rideout’s Senior students; Dana Hicks and Willy Scholten. Sensei Rideout would visit from Moncton for gradings and to teach on occasion.

By 1989 the studio was gone but the teaching lineage continued with Mark Rushton, another of Sensei Rideout’s Senior students. Achille (AJ) LeFort began his training with Sensei Rushton.

Both AJ and Rob had previous experience in other styles of Martial Arts.

AJ and Rob continued their training with Sensei Rushton in various locations in Fredericton. Eventually, due to Sensei Rushton's business priorities, both began training under another of Sensei Rideout’s students, Trevor Sawler.

After several years, Jim Dickens began to train with the club (which remained nameless after Bushido Studios ended) and he introduced Aj and Rob to his Sensei, Greg McKenna, Kyoshi, 6th dan.

McKenna Kyoshi is an advanced practitioner of Okinawan Goju Ryu, having been taught by Ken Tallack, Hanshi, 8th dan since a very young age.

Hanshi Tallack has trained directly under the late Dai Sensei Meitoku Yagi while living in Okinawa.

Tenshi was first introduced as Fukyu I and Fukyu II. Fukyu I = Ten and Fukyu II = Chi. This kata was developed around 1974. What is unique about this kata is that it is a two man or "mirror kata". Fukyu I techniques (AH) correspond to the techniques in Fukyu II (UM). Personally, I find this kata good preparation for Seiunchin, Seipai, and Suparinpe. The origin for the name Tenchi came from the first line of Hakku Kempo, it reads - "Jinshin wa Tenchi ni onaji" 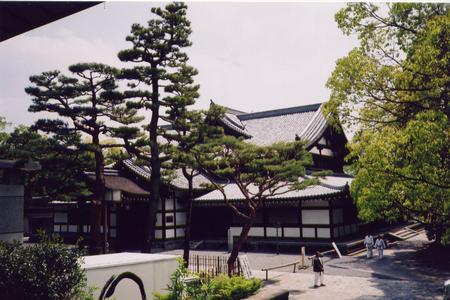 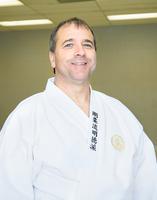 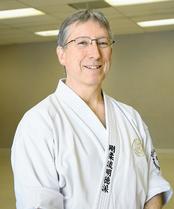 The Sanchin kata was brought to Okinawa in the late 1800's by Naha-te master, Kanryo Higaonna. The name Sanchin indicates that through the practice of the kata there is a produced unity of mind, body and spirit. Sanchin is our Kihon or Basic Kata. All of our other Kata are related to Sanchin. Our core strength for all other Kata is derived from Sanchin practice.

Dai Sensei believed that to maximize your Sanchin training, you should practice the kata at least three times daily. The first time is done to get warmed up with inaudible breathing. The second time you practice, you must breathe normally and execute proper dynamic tension. The last time you practice, you must execute the IBUKI breathing (deep abdominal breathing) plus correct dynamic tension. Dai Sensei YAGI Meitoku explained often the importance of Sanchin - if you practice Sanchin everyday and maintain a proper diet... you should become very healthy and less prone to get ill!

In the dojo the is no specific count like in the practice of Kaishu Kata. Like Tensho, Sanchin should be all done, with no count, in one fluid motion. The lower belts of the dojo should follow along side their seniors. They should never go ahead of the seniors count.

It also should be noted that Master Miyagi introduced the closed fist technique to the Sanchin and also the turn.... the original version brought to Okinawa by Master Higaonna emphasized open hand techniques and was done facing the same direction.

The following Goju-ryu Kata are classified as Kaishu Kata. Kaishu translates to mean open hand form. The idea here is that the Karateka's posture should retain a similar state of relaxation to that of an open hand.

The Gekisai kata were develop around 1940 by Master Miyagi as instructional kata. The basis for the Gekisai kata were to help beginner students, as a filler between Sanchin Kata and Saifa. As you can see both sides of the body gets to practice each set of techniques, starting off with beginner techniques and ending up with the most difficult of moves. The Gekisai kata introduces the student more complex moves with an easier form of execution. Students must grasp the concepts of the Gekisai kata if they want to be able to understand the the more advanced Kaishu kata. Techniques that Miyagi admired from Shuri-te such as the gyaku shuto were also incorporated into these kata.

Saifa kata was also believed to have been taken to Okinawa by Higaonna Kanryo Sensei. It is the first classical Kaishu kata to be learned in Meitoku-ha Goju-ryu. Saifa introduces students to a new set of strikes and smashes (back fist, hammer fist, and under punch). Some historians believe Saifa was invented in China to help teach and execute combat tactics on a gun wall of a boat, mainly because all the techniques are done going facing forward or backward in a straight line. After much practice of this Kata, the student, in turn, should have a stronger sense of balance.

Shisochin or Fighting Four Monks concentrates on four directional fighting with emphasis placed on turning fast and reacting quick to finish your opponent. Some resources stated that Shisochin was Miyagi's favourite kata. Shisochin is an intermediate level kata. Technically, it is comprised mainly of the nukite (spear hand) and also the Te sho (palm) for blocking and striking. One unique attribute of Shisochin is the turning sequence (heavy Shuri-te influence) performed just prior to the Atama ate. Also the arm break is introduced.

Sanseryu is a kata of 36 different fighting exercises. The number 36 could be symbolic of the 36 families who settle in Kume village (Kume Mura), Okinawa in 1392. An important historical note indicates that Dai Sensei Meitoku Yagi, Hanshi, has direct ancestral roots to this settlement in Kume. This is a more advance form which relies on strong kicking ability and also koshi. Koshi is the ability to use your hips to pack power in your technique. Another characteristic in Sanseryu is the foot placing after the Sokuto. This is a very important technique to master and requires years of dedicated practice.

Sesan, which translates to mean 13 techniques, is believed to be the oldest of all Goju-ryu kata. It is an advanced kata which relies heavily on knee kicks, stomping and strong punching. Two versions of Sesan exist, the Naha-te form and the Shuri-te form. Goju-ryu adopted the Naha-te version refined by Kanryo Higaonna Sensei. Dai Sensei teaches us that Sesan, along with Seiunchin are the training Kaishu Kata of Meitoku-ha Goju-ryu. Sesan Kata best fits the body type of a big muscular man! Due to its early origin, Sesan has many different variations.

Seiunchin's origin lies in the internal system of Wu-shu, Hsing-I. Seiunchin's direct translation through time has been lost, but many Goju-ryu Karateka refer to it as Marching far Quietly. Seiunchin is a unique kata because only hand techniques are used. An advanced kata, Seiunchin works a lot on the shiko dachi and incorporates strike such as the back fist and elbow. Along with Sesan, Seiunchin is the other training Kaishu of Meitoku-ha Goju-ryu, which is best suited for a smaller man with less physical power. Many times in the kata techniques are performed with the other hand used as re-enforcement!

Sepai or 18 techniques is one of the more harder forms of Goju-ryu. Its main characteristics is body twisting techniques. Also, for students who practice Sepai, they must concentrate on the hands and feet working together in harmony to properly execute certain techniques. Kanryo Higaonna Sensei brought this kata to Okinawa from China and adapted to Naha-te. Meitetsu Sensei often used the analogy of the importance hands working together (one hand is father and the other is the son.......working together to have greater strength.) View kata here

One English translation for Kururunfa is Holding Ground. Kururunfa teaches the Karateka balance. Within this kata, students are able to practice on their stance transitions. Also, in close hooking blocks and grappling manoeuvres are practiced. This is the second hardest kata in the Meitoku-ha Goju-ryu system. One of the signature moves of the Kata is the difficult throwing procedure towards the end of the Kata.

Suparinpe is the most difficult of Meitoku-ha Goju-ryu kata. Its Japanese Kanji reads 108 techniques. It incorporates many moves found in earlier kata (Sesan and Sanseryu, just to name a few) but of a higher degree of difficulty. Among its difficult hand techniques, it contains a unique flying kick. To practice Suparinpe correctly, one must acquire proper breath control, and a very precise timing of hands, feet and body. It is very long, strenuous, and should take a greater part of a lifetime to master.

Chojun Miyagi Sensei invented Heishu Kata Tensho in his later years, based on his studies of a Chinese exercise called Rokkishu. The original form is explained in great detail in the Bubishi. For Miyagi and his older students, Tensho was a way to practice the concepts similar to Sanchin kata, but in a more relaxed state, with less emphasis on body hardening, but equal emphasis on deep breathing. This will be the last kata to be practice during a dojo training session.

Two versions of this Kata exists: the Kihon Kata and the Heishu Kata. Dai Sensei has referred to the Heishu Kata Tensho as Sanpo aruite Kata Tensho. The differences in the Kata lie in the opening and closing procedures. Like Kaishu Kata (open hand form), Heishu Kata Tensho demands the Karateka to learn the execution of open hand technique with that of the power of a closed hand. Another idea of Heishu Kata is the closing of the practice kata.... or the cooling down kata.

Some technical aspects of these kata are different than those of Kaishu kata.

1. Both yoi and Yame position is chudan level, not gedan like in Kaishu kata. This is to represent the Chinese influence on these Kata.

3. the Meitoku-ha no Kamae is a variation kake uke no kamae with emphasis on guarding the mizo ochi. This kamae is more practical in a real fighting situation.